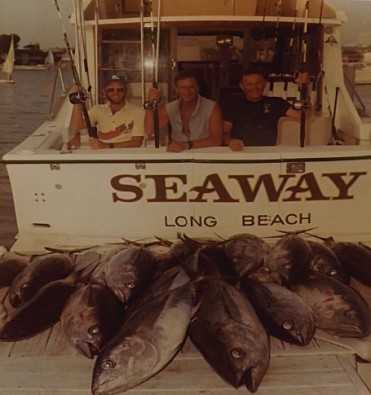 After the past three years of poor offshore fishing up above the border I’m ready for a change. We’ve suffered through some of the worst marlin years ever, minimal kelp paddy fishing for yellows, short-lived bites on dorado and a dearth of yellowfin on the dolphins. And this year, even though a vigorous, late season weather front is pushing through right now with a huge amount of northwest wind, remember it’s still spring and there is good reason for optimism about the summer/fall and beyond.

Anecdotal evidence points to some longed for change on the horizon. All winter the water temp at the San Clemente Basin Buoy has stayed several degrees above what it has been in past years. Even when the big winds blow it briefly dips and then pops right back. Clarity in many locations is far improved over what we’ve seen recently. The squid is virtually MIA from all the normal seasonal haunts, some of the yellows caught at the Coronados have had red crabs in them and schools of Spanish jacks rolled through the area around the outer rigs on the drop-off.

Past these signposts in the sea, which I’ve often found to be accurate forecasts of the shape of things to come, is the highly objective scientific data that has the news media all stirred up. There has already been extensive speculation and prognostication about a pending warm episode. It all sounds good but it’s a bit too early to be so optimistic.

Even though there were a series of westerly wind bursts earlier this year that created a very large Kelvin Wave (a subsurface pool of warmer water) that is moving across the Pacific and is likely soon to surface off the coast of South America and (if it happens) begin the actual process for the formation of an El Niño, there is one major hurdle yet to be surmounted: the “Spring Unpredictability Barrier.”

That phrase is a mouthful but what it means is the predictions made in the late March/April/May timeframe are often waylaid by Mother Nature, herself. Conditions can look perfect and then, “Pffft,” just like that, things change and we’re back to square one and wondering what happened. So like I said … it’s a bit early. But as it stands now and if all the signs stay on track, the predictions you’ll see by late May/early June will be the real deal and are likely to be quite accurate.

If the pundits do get it right and we are headed for a big El Niño, like most things in this world there are two sides to the coin. As far as our fisheries are concerned there are typically major disruptions in the bait supply. Most of the time the squid situation can get very tough and there have been warm water years when we just don’t have much around at all. The warm water also can get our staples, the anchovies and sardines, pushed way up above us or out to the west on the cooler, nutrient rich edges.

We might see all the kelp beds take a heavy hit or die off completely; many of the rockfish species head either north or deeper to find the cooler waters they prefer and the coastline gets rearranged by the bigger swells from a far more active storm track. This year we had 5 or 6 inches of rain; next season there might be five times as much. 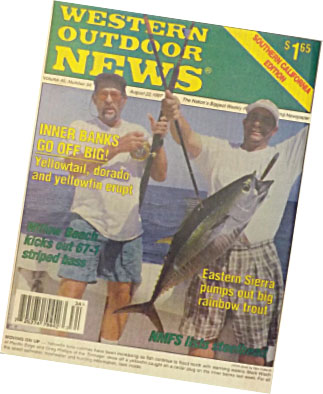 I’ve had the good fortune to have fished through many El Niño seasons. The less notable ones bring us some good fishing, a smattering of tropical exotics and warmer, wetter winter weather. But it’s the heavy hitters like the 1982/’83 and ‘97/’98 that bring the most profound changes to our local waters and create so many of our most cherished memories of those special times on the water.

At the start of the ‘82/’83 El Niño, we didn’t have as much knowledge about the process as we do today. So to be fishing on a local trip in January and see purple/blue 62 degree water and have our bass stuffed with red crabs was an interesting sidebar to the day but nothing more. But a few months later when the whole surface of Alamitos Bay was literally covered with millions of them, it began to register a powerful and very different scenario was in the works.

From then on it was game on … with another weird addition to the mix almost every week. Sailfish caught just below the Coronados, 84-degree water inside Clemente, wahoo clipping off marlin jigs rigged on heavy mono leader, frigate and tropic birds putting us on the early schools of tuna and some of the best-ever marlin fishing up on the Osborn Bank once we cracked the code of drifting on the deep bait schools.

If ’83 was amazing then 1984 was nothing short of spectacular. The water never got cold that winter; the first marlin of the season was caught on Jan. 1. A handful of others were caught throughout the month and even one in February in the 61-62 degree water off the east end of Clemente. The conditions warmed early and the main schools swarmed up the coast and lingered awhile on the stock spots before pushing way out west. One morning off the East End of Catalina we tagged and released four fish: three stripers and an estimated 150-pound black. Its short, heavy bill, a smaller dorsal fin, no stripes and wedged out pectorals made it look noticeably different from his cousins and pointed out the obvious fact … here we go again!

For me, 1984 was an all-time classic “Big El Niño” type season in Southern California. I know the pundits claim that scientifically the ‘97/’98 event measured bigger but in the real on-the-water world ’84 was one for the record books. We followed the fish up past the West End of Catalina, up the ridge across the 17 and then up to Anacapa and then across the lee side of Santa Cruz out to the rugged edge of the famed Santa Rosa Flats.

The fishing was nothing short of fantastic. Early on we had stellar fishing for quality albies below San Diego but that was just a teaser for what was coming later. The marlin fishing was the best I’ve ever seen in SoCal and mixed right in with them were tanker-grade yellowfin tuna. We ran on one bird school thinking it was marlin only to find it straight YFT … big ones. I put a mackerel right in the foamer, came up bit and watched a marlin come up jumping and I was so bummed. 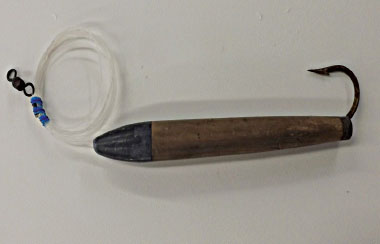 We spent the summer and fall on those schools racking up impressive scores. And in the late season we followed the fish back down and ended up right outside the rigs off Long Beach. The huge albies had settled in on the big bait schools and provided outstanding opportunity to catch a trophy or a world record. I was proud of my 65-pounder but we caught others much larger. We finished off the year following that spot out around the West End, down toward the 499 and Ron Howarth capped it off with a state record 239-pound yellowfin on 40-pound during a late November cloudburst, an outstanding catch that stands to this day.

At this point there’s just no telling what may happen with the weather, the water and the fish later on in the year. But if the current predictions come to pass … we’re going to have a chance to make some spectacular catches. And those who make the best of the opportunities presented will have all their gear perfect, tested and ready to be pushed to the redline and beyond by a grade of gamesters seldom seen in our local waters.

Capt. Mark Wisch’s next book Way Out West is about offshore fishing. It’s based in part on the history of private boat fishing in blue water and many of the stories came from countless trips captained during many of our warm-water events. ■

Bluefin Continue to bite for those will to make the trip. Sportboats continue to … END_OF_DOCUMENT_TOKEN_TO_BE_REPLACED

This past week saw some wind and tough weather. As we pass the full moon the … END_OF_DOCUMENT_TOKEN_TO_BE_REPLACED

Over the weekend, my boat partner, Matt Kotch and I were returning to Newport … END_OF_DOCUMENT_TOKEN_TO_BE_REPLACED

The Tuna continue to be the stars of the show. With new techniques like high … END_OF_DOCUMENT_TOKEN_TO_BE_REPLACED