It was July 16, 1958, when Richard Bertram laid his eyes on the first Ray Hunt designed hull. It was Ray’s prototype 23–foot deep vee. It was cutting through the six–foot seas at 30 knots with ease. It handled the seas like no other hull Bertram had witnessed and he knew this design would change boating forever. Richard then had Ray take him out the next day, and he commissioned Ray to design a 31–footer on the spot. The new 31 made its debut at the 1961 New York Boat Show and, as they say, the rest is history. The 31–foot Bertram earned its rank as the most recognized and loved fishing platform in the world—and for good reason.

Fast forward to 2015, when Beniamino Gavio purchased Bertram Yachts from the Ferretti Group. The experienced yachtsman’s company Gavio Group, which also owns Baglietto (one of the world’s oldest boat builders) and Cerre Cantieri Navali (CCN), soon made a commitment to rebuild Bertram in America. Enjoying a depth of financial resources that had not been available for decades, the new, modern Bertram launched its 35 footer in 2016 at the Newport International Boat Show in Rhode Island. Earlier this year, the first of these models hit the West Coast, and I was honored to be able to go out and give her a test run.

I have a history of fishing on the Bertrams. In my numerous trips to Tropic Star Lodge in Panama, I have accomplished many personal bests and first specie catches on the classic 31. We have been out in glass weather and also in some real rough stuff, and the old standby always performs. I also used to fish Drew Lawler’s 38 Bertram and had great experiences. To say the least, Bertram has a place in my heart.

I have always said that the 33- to 42–foot range is the most efficient platform from which to fish. A single owner can use his boat without a captain and crew. When fishing you are right there with your guests—and when billfishing, it is a much more intimate experience. When I heard 35 was the new size I was beyond pleased.

I met the guys from the West Coast Bertram dealer, 117 Yachts in San Diego, on a nice sunny December day. As I approached the boat in the slip, I noticed the design didn’t stray too far from the original 31 with its clean lines but also a modern, sexy layout.

Two of the first things that caught my eye were the stainless trim on the bulkhead door and the teak helm station. It’s amazing how a small amount of detail can break up the gel coat and really give you a yachty feel.

The guys raised the engine hatch, which is very similar to the 31 design, but with a much larger engine room area. The Seakeeper Gyro Stabilizer was a pleasant surprise. The addition of a Seakeeper is huge when it comes to adding to the comfort of your guests, as well as while drifting for tuna or fighting a billfish. Additionally, the 35 I tested is equipped with a Mase Generator and a specialty micro bilge pump system to keep the bilge extremely dry, removing even the tiniest amount of water.

Also, the Bertram 35 we tested is equipped with bow thruster. The great benefit here is the main engine controls have fingertip buttons to control the bow thruster. No more separate control to distract you while docking.

As we got under way, she hopped up on plane with ease, even at a solid 20,800 pounds. The twin CAT C7.1s have plenty of power to get out of the hole and even more at the top end, topping out at 37.1 knots.

She cruises at 23 knots sipping fuel at 24 gallons per hour. The 35 tops out at over 37 knots and is still only burning 48 gallons per hour at wide open throttle. A fast cruise at 27.1 knots gets you a burn rate of 29 gallons per hour—not bad for a 35 footer. For those of us who do a lot of slow trolling, it was good to note we were able to get her down to 3.7 mph with one engine out of gear.

The 35 handled head chop with ease (as you would expect from any vessel dawning the Bertram name) and was as good down sea as well. When making tight turns at high speeds, she leaned in and dug in—giving that race car suspension feeling. She carries 310 gallons of fuel and 50 gallons of fresh water so she’s in it for the long haul.

The cockpit is huge, providing plenty of space for you and your buddies to get the job done during that wide–open tuna bite. There is a large bait tank built into the transom that should carry plenty of live stuff.

The wake was very clean producing nice lanes for trolling at that 6-8 knot range. Below the deck are large fish boxes ready to take the day’s catch and keep it iced down. On this particular vessel, they opted for the Pipewelders hard top with rocket launchers, giving plenty of storage for rods and a great sportfisher look. She was also outfitted with aluminum outriggers and was ready to fish right out of the box!

The salon is incredible with a sleek, modern design. The refrigeration and freezer is provided through subzero drawers, maintaining the clean design. There is a nice seating area for dining as well as full kitchen amenities. In a very James Bond-like design move, above the salon is a drop–down compartment to store rods. The cabin is well laid out to enjoy a good night’s rest and ready yourself for the next day’s fishing. All parts of the 35 are designed with the most storage options possible with no nook or cranny left unusable. Likewise, the head is nicely appointed, continuing the sleek, clean theme.

The modern construction techniques, design developments and Tier Three diesels make the 35 one of the most efficient Bertrams ever built. The infused vinyl ester solid glass hull bottom with Kevlar centerline and strake reinforcements—as well as the structural grid—give the hull its rigidity and strength.

The 35 we tested is built like a tank but in a manageable package, with all the amenities. You are also able to go down and sit at the table to relax or go to the cockpit to rig up, yet never lose visibility with the standard iPad screen mirroring everything. You can operate the boat and monitor the gauges from the handheld unit.

After spending the morning on the new 35 Bertram, I can say that I was truly impressed. Keeping Bertram’s storied look while infusing modern design and class make this the hottest new vessel to hit the West Coast in a long while.

True to its legacy, the 35 is a great combination of strength, power and straight up fishability while flashing the sexy lines the modern boat owner relishes. In other words, spend Friday evening cruising the bay wining and dining family and friends. Then, in the morning, run to the Butterfly Bank and crush the big tuna. She can do it all.

Give the nice folks at 117 Yachts a shout at 888-BERTRAM to take a look at the new Bertram. You have two chances to see it in San Diego: at the dealership or the Jan. 25-28 Sunroad Marina Boat Show. Either way, you will not be disappointed! To learn more, visit 117yachts.com or Bertram.com.

If you are looking for a larger platform, Bertram is also coming out with their new 60 footer soon, which I am sure will be another show boat review first page 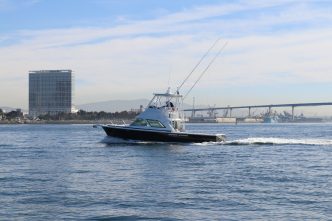 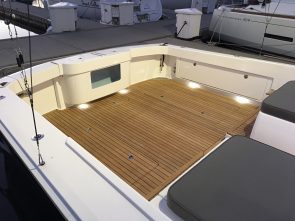 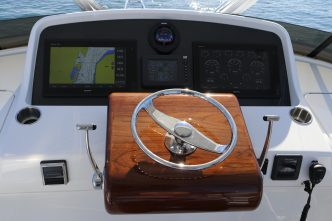 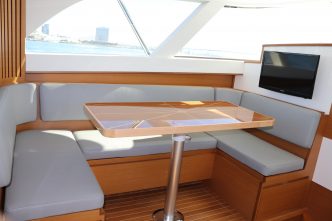 So, the fish are showing in good numbers already. The sport boat fleet out of … END_OF_DOCUMENT_TOKEN_TO_BE_REPLACED

Bluefin off Ensenada on up to the US Waters.......mostly a night bite on the … END_OF_DOCUMENT_TOKEN_TO_BE_REPLACED

From flatfalls to poppers to squid bars and even deep dropping for swords, there … END_OF_DOCUMENT_TOKEN_TO_BE_REPLACED