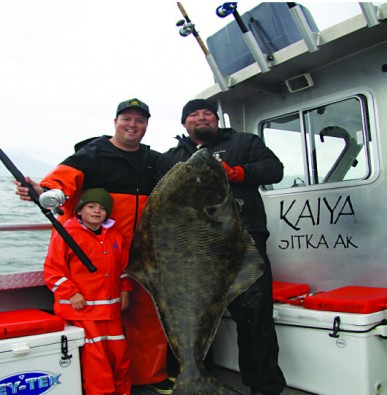 Sitka has been a destination that holds a special place in my heart since the first moment I laid eyes on it. I can remember my first landing at the airport, where the Pacific Ocean engulfs both sides of the landing strip. Of course, the fact that it has some of the world’s best salmon and halibut fishing doesn’t hurt either.

Seeing some of these trips through the eyes of guests that have never experienced these amazing trips is truly a joy. Seeing a trip like this through the eyes of two 7-year old boys is even better. When we planned our trip to Kingfisher Charters and Lodge in Sitka, Alaska, it was to be a boys’ trip. Two dads and two 7-year olds experiencing Alaska’s fishing at its best: I with my son Cole and friend Jared Eisenburg with his son Aidan.

When planning a family trip like this with your kids, make sure your timing is right. Later in the season the silvers make their giant run and you can keep six of them. The action is so fast it keeps everyone in the game. There is definitely no boredom involved and the size of the silvers, which tend to run a bit smaller, gives the smaller guys a good shot at winding them in. 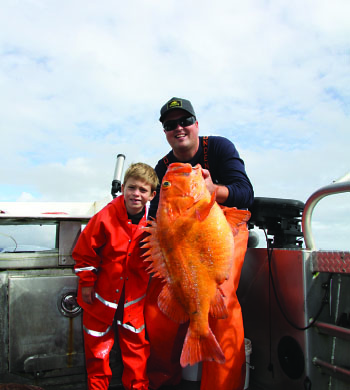 The wildlife viewing is as good as it gets. While running out to the fishing grounds we ran across whales, sea lions, bald eagles, puffins, otters, deer and there were even bears roaming the shoreline. Sitka surely has what I would call the true Alaskan experience.

The time came and we boarded our plane heading out of Seattle for Sitka. All the while there was anticipation for what Alaska would bring with questions like, “Are there bears at the lodge?” or “How big are those halibut again?” The plane ride was short and in no time we were looking out the windows at the clusters of islands surrounding our destination. After a smooth landing we made our way to the lodge where our adventure would begin the next morning.

Seth Bone, owner of Kingfisher, was one of the originals to start chartering in Sitka back in 1990. It was the ideal place to headquarter and we could tell that the crew has been doing this a while. Their experience was clearly evident and in both of our visits here there haven’t been any hiccups. 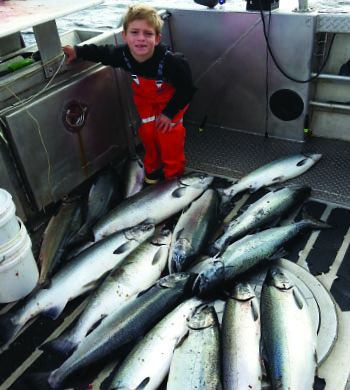 The Kingfisher Lodge is nicely appointed with clean and spacious rooms and we even had a hot tub on our patio. This came in handy after a day of pulling on fish. The food was outstanding and there were no shortages of it, plus variety enough for even the picky eater.

Another great thing about the lodge is it has a large fleet of boats working the expansive waters. The boats spread out and find the fish then stay in communication so you’re able to stay on the schools. This is huge benefit because there are a lot of areas that the salmon could be running through.

Kingfisher Charter Capt. Brian Oberreuter aboard his vessel Kaiya, a 35-foot Coldwater, kept us on the water for the trip. I fished with Brian a few years back and actually took his son fishing when he was in SoCal the following winter. It was kind of full circle to have him take my son out. We look forward to fishing with Brian as he has the patience to deal with kids and a great customer service ethic that sets him apart. That, and the fact that we always catch lots of fish with him!

The first day we loaded up on the Kaiya, knowing the wind had blown a bit the day before so the ride wouldn’t be completely smooth. We ran down through the protected water ways then just as we made our way out of the inner water we dropped the downriggers and hoochies and in no time the boys were pulling on a few silver salmon. 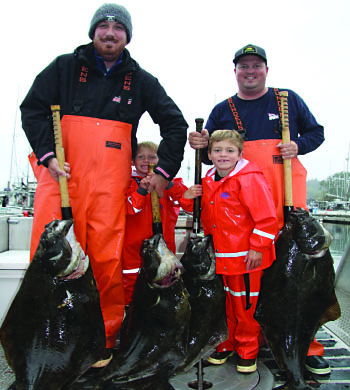 The shear speed of these coho is amazing. They strike hard and run hard with some jumps in between. The bite was good, but we heard from some guys up around the cape that the weather wasn’t too bad and the bite was good there as well. Before we took off, we gave a quick rockfish drop and both boys doubled over with nice lingcod on the light rods.

When we ran up to the cape, we put the downriggers back out. Brian dropped the rods in and we were off trolling to find the school. We focused on loading up on silver salmon the first day and the hookups started every few minutes or so and it just got better. It was like a wide open albacore bite. My son Cole and his buddy Aidan put the wood to their limits of silvers and then we went to work and got ours as well. Since sea conditions were a bit rough for the boys we ran closer to shore and targeted some rockfish and smaller halibut. The black rockfish there are crazy, even biting bare hooks, and they taste great! That evening the kids sat at the dinner table telling stories of the big ones they caught.

The second day our guests had planned to tour the town and fish a bit in the local rivers, so Cole and I went out with Brian in search of some larger halibut after we filled our salmon limits. The morning started with beautiful weather and a great silver salmon bite. There was a bit of a mix of some trophy size kings as well.

Cole landed a king that was just under 30 pounds, a true giant! The bite was full speed and we loaded the deck quickly with silvers. We made this trip in late August anticipating the silver fishing would be exceptional and the forecasts were spot on. If looking to take younger kids up to Sitka, August is a great month to do so. The action was fast and furious, keeping the kids interested and excited.

Once we settled in with limits of silvers and kings we went off to one of Brian’s halibut spots and put the anchor down. We were expecting to wait out the bite, but on this occasion we were on halibut after halibut, right off the bat. Brian set up the cooler so that Cole could stand on it and wind in halibut from the rod holder, which worked out really well for him. We kept one in the undersize category and held my limit for a giant. The lingcod also joined the action early and we released a number of lings in the 35- to 45-pound range. 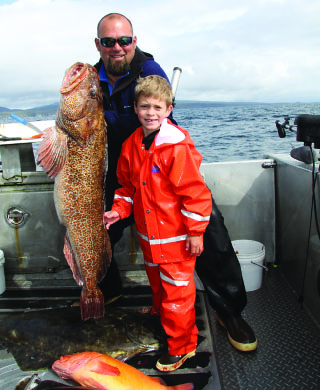 Then we caught the largest yelloweye I have ever seen in person. Years ago when I fished with Brian, I got one around the 21-pound mark, but this fish weighed in on the scale at 23.8 pounds. Throughout the day we caught and released some really nice halibut in the 60- to 120-pound range. Needless to say, the day was another huge success.

On our final day our guests rejoined us on board and we were ready for a rod-bending day for the kids. We got our salmon out of the way quickly and hit a spot located farther north for some larger halibut. It was a place where Brian had guided me to an exceptional fish on a previous trip and was, in fact, the spot where he had caught his largest halibut to date at more than 400 pounds!

The bite was good and one after another we released nice size halibut from 70 to 100 pounders. We kept a couple “unders” for eating while continuing to try for the giant. The boys had a blast catching some nice halibut and lingcod. We did hook the “mama” we were looking for, but unfortunately she pulled the hooks. Halfway up the water column there were some mean head shakes and off she went. Still, not a bad way to end a great trip. 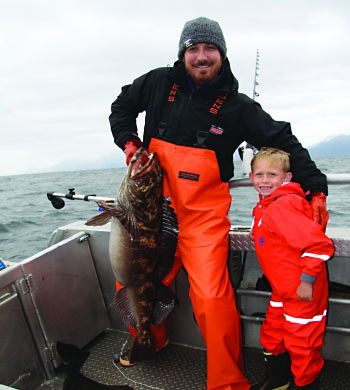 Neither the dads nor the boys were ready to head home at the end of our stay. The fishing and company had been great and the scenery unmatched. I will be back to Sitka real soon; this is a destination that will always be on my travel list.

If you are planning that trip of a lifetime to Alaska, give the guys over at Kingfisher Lodge a look. You can reach them via www.Kingfishercharters.com.

Sitka, originally home to the Tlingit Indians, still has a large population of Native Alaskans. In the downtown area there is a remarkable landmark sitting right in the center of town: Saint Michael’s Cathedral, built in 1844-48. The quiet city of roughly 9,000 is filled with culture and atmosphere, as well as some very nice people.

Home to some of the best fishing around, Sitka features one of the best catch rates in the world for both salmon and halibut. Uniquely situated, you won’t find the extreme tides that can hinder other Alaska destinations fishing halibut. Here, you can go just about any day of the season. This area has beautiful weather, great atmosphere, great fishing and easy access. The airport is tiny, making it easy to find the shuttle for your lodge. There are many daily direct flights from Seattle every day.

From a weather perspective, the temperatures during the summer average in the high 50s to low 60s, while the average annual precipitation is around 94 inches. During the summer you may experience some nice warm days but there will be a few rainy days as well. Make sure you layer properly since the weather changes quickly.

Sitka enjoys its main run of king salmon in May and June while the coho arrive in mid-July through September. As you can see from our trip experience there are still kings around in late August, and we had a few each day of our trip. The halibut and rockfish bite all year long and are a staple in your fishing day.

Bluefin Continue to bite for those will to make the trip. Sportboats continue to … END_OF_DOCUMENT_TOKEN_TO_BE_REPLACED

This past week saw some wind and tough weather. As we pass the full moon the … END_OF_DOCUMENT_TOKEN_TO_BE_REPLACED

Over the weekend, my boat partner, Matt Kotch and I were returning to Newport … END_OF_DOCUMENT_TOKEN_TO_BE_REPLACED

The Tuna continue to be the stars of the show. With new techniques like high … END_OF_DOCUMENT_TOKEN_TO_BE_REPLACED