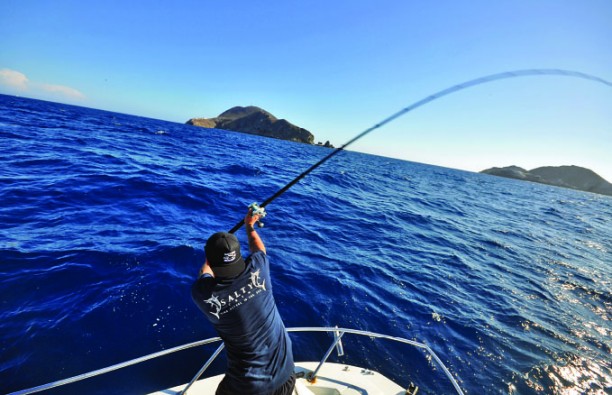 Whether you credit El Niño, blame it on Alaskan high pressure ridging, or think that it’s a byproduct of the warm water blob that’s been lurking in the northeastern Pacific the past couple years, one thing is for certain: 2015 is going to go down in history as the year of the giant coastal yellowtail. I think that a friend of mine summed it up best when he said, “It’s like someone took all the yellows from Cedros Island and delivered them to my doorstep.” In his case that doorstep is the waters off Long Beach, but the amazing part about this year is that it delivered these giant yellows to every doorstep from San Diego to Santa Barbara. During the summer months it was pretty simple to catch one of these trophy yellowtail. Just line up behind the 30 other boats at the bait receiver on Saturday morning, then follow the string of boats to the area that had been biting for weeks, find your spot in the crowd, and commence downloading of fish. Though not my cup of tea, this pattern worked extremely well for thousands of boaters every week. 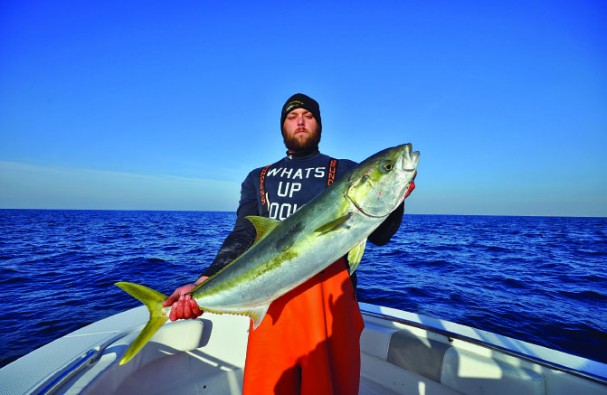 But summer is over and as we transition into fall and winter, there’s not always going to be a crowd of boats around to show people where the yellowtail are biting. In my opinion, that’s a good thing! The fish are still around and unless something drastically changes, they should be here through next summer. So why not use these off-season months to fine-tune your fishing techniques? That way when things do start to get crowded again, you’ll have the confidence to drive away from those crowded areas and find your own fish. Here are some simple steps to get you pointed in the right direction.

Before you can make an accurate prediction as to where fish might be biting, you need to understand where they were biting and the reason they chose that particular location to bite. Using this year’s hot August yellowtail bite off Long Beach as an example, let’s break down the where, when and how.

This bite started out at the 150 spot, which is a hard bottom area that lies between the Horseshoe Kelp and the deepwater rockfish areas off Long Beach. The 150, like almost every spot along the coast that has produced big yellows this year, is a large hard bottom flat adjacent to deeper water. It’s impossible to say for certain why these spots have been holding yellows, but I’d venture a guess that it has something to do with upwellings. 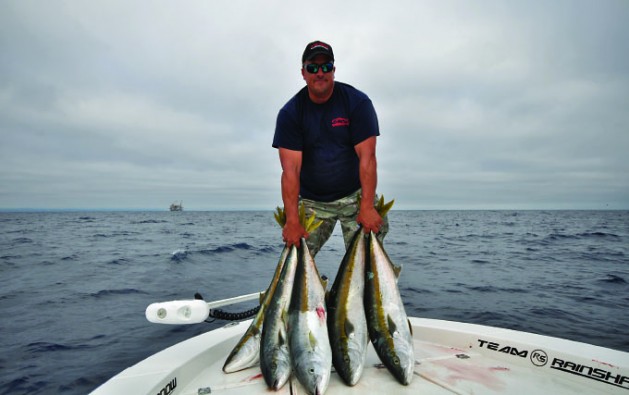 These upwellings are the result of deep-water currents running into the coastal shelf. This impact results in all of the plankton and other nutrients these currents carry getting pushed up toward the surface. These plumes of nutrients attract bait fish, which tend to school near the deep water edges of the flats, and the aggregations of bait fish in turn attract the attention of any yellowtail cruising along those same deep water currents.

This year it seemed that most yellowtail bites started around the new or full moon. I’m venturing another guess here, but those lunar periods also have the largest tide swings and strongest currents. Stronger currents mean increased upwelling and larger plumes of nutrients. Theoretically this would lead to increased baitfish activity and greater drawing power for the yellowtail that are passing by in deep water. 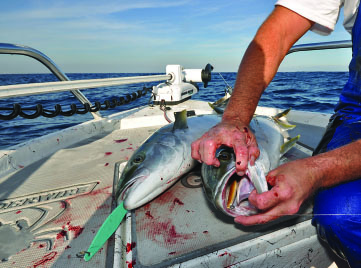 As the lunar cycle moved away from the extremes, the yellowtail tended to spread out this summer. In the case of the August bite, the fish that had been biting on the 150 spread out and started biting on the Horseshoe Kelp itself. It’s interesting to note that the two best bites were around the 105 area and the Rockpile. The 105 area is a no-brainer as it lies directly adjacent to the 150, but the move to the Rockpile isn’t as easy to explain as the fish would have to swim a good distance to get there and pass plenty of prime habitat on the way. The story becomes a lot clearer if you look at a chart of the area. While similar in depth and topography to the rest of the Horseshoe Kelp, the Rockpile area has one thing the rest of it doesn’t: deep-water access. With Fermin Canyon abutting it to the west, the Rockpile has the same potential to upwell and aggregate baitfish as the 150. So it makes sense that the fish would show up there as well. 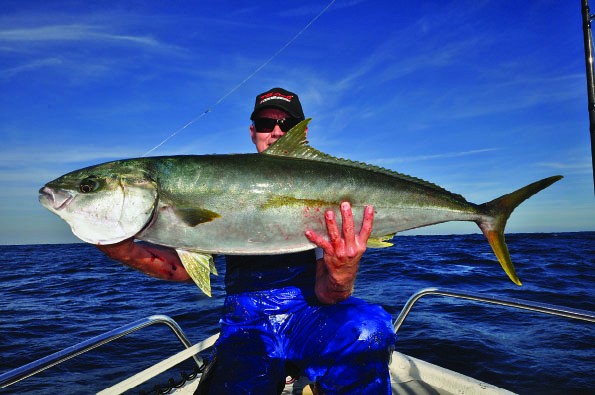 If you fished for yellowtail during the first half of this year, you know that we had a huge influx of red crabs in many areas. Well, those red crabs are carried by the same currents that carry nutrients, baitfish and yellowtail. So it’s no surprise that they first showed up in the exact same areas that have produced the most yellowtail this year. So, how is my long-winded explanation supposed to help you figure out where to catch yellowtail? It’s actually pretty simple. The first step is to get a chart and look at the bottom topography of areas where you know that yellows have been caught this year and then look for other areas that have similar features. These features include water depth, terrain, orientation to the coastline and whether or not they are adjacent to deep water. Once you’ve found a few areas like that it’s time to get out on the water and start looking.

Things can happen really fast when you’re prospecting for yellowtail away from the fleet. Hours of fruitless searching can turn into seconds of opportunity and if you’re not ready, you might miss your only shot of the day. I can’t tell you how many times I’ve been driving, saw a couple birds starting to act right, pulled back the throttle, grabbed my rod and got a jig in the air just seconds before a big yellow came up crashing on bait. Those casts don’t always result in hook ups, but if I’d have waited even 30 seconds longer, I probably wouldn’t have had any shot at all. 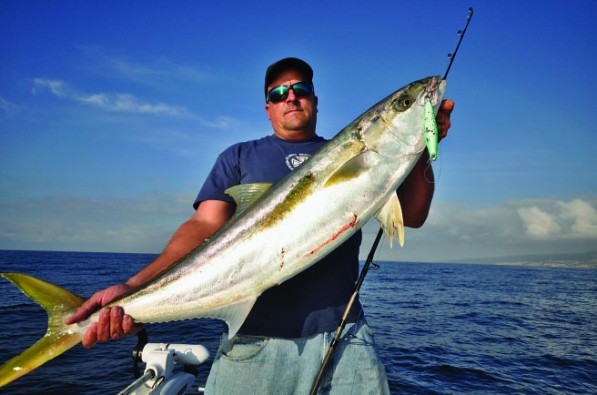 To keep things simple, I’ll forgo a stop at the bait receiver when targeting yellows, as I’ve found they’ll bite the jig just fine when they aren’t getting run over by a fleet of boats. By the same token, yellows that pop up on bait fish don’t seem to be too picky about what jig you’re throwing. So, I’ll normally have a yo-yo jig, like a Tady 4/0 heavy, tied on my jig stick. This lure gives me the flexibility to drop the jig on deep meter marks or fast wind it on the surface if the fish pop up. If it seems like it’s mostly going to be a surface bite I’ll trade out the yo-yo jig for a Tady 45 light.

Now that you’ve got your tackle and an idea of the areas you’d like to check out, it’s time to get to work. The first thing you’ll want to do when you arrive in your zone is to attempt to locate and identify a food source. Yellows will eat just about anything, but the ones on the coast this year have been keyed in on three basic things; red crabs, anchovies and sardines. 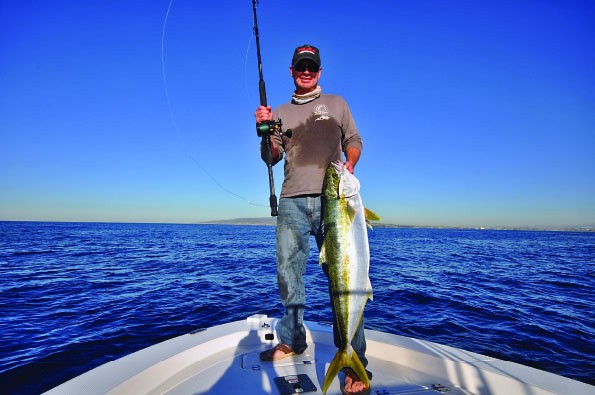 If you find any of these three in an area that you believe has the potential to produce yellowtail, you can get a good idea of whether or not there is any predation occurring by observing the posture of the baitfish. I’d immediately rule out any area where the baitfish appear to be completely relaxed as happy bait fish are not usually conducive to good fishing. If you can see the baitfish in the water and they are doing anything other than running for their lives, the yellows probably aren’t around. The same holds true for the baitfish you’ll see on the meter. Evenly spread and fuzzy schools of bait are no good, nor are long strings of crab that meter like a wide thermocline. Baitfish that are having a bad day show up as small tightly grouped balls or broken and sporadic lines of crab. Find that and you won’t even need to meter the yellowtail to know that you’re in the right zone as the harassed bait schools have already told you everything you need to know. 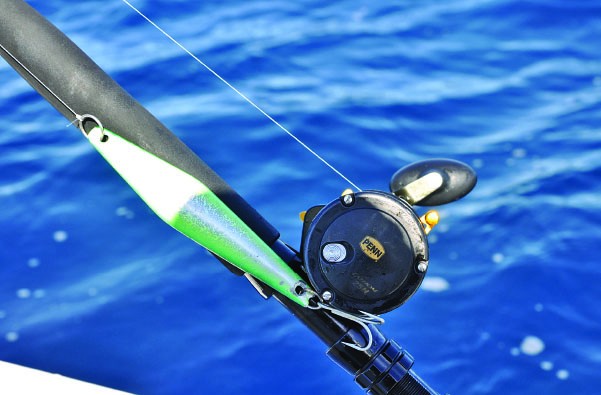 Another extremely valuable tool in the war on yellowtail is the common tern. These birds, more than any other species, are the ones to watch when looking for fish. Find some terns spiraling and picking over a specific spot and you can be sure that there is some sort of feeding activity occurring below them.

It’s going to take some time spent observing tern behavior before you’ll get a good understanding of what these birds are telling you, but the basics of it are pretty simple. Despite being small and hyper looking, terns are actually very relaxed and efficient birds. So, if you see a group of them that are just cruising around and occasionally diving down to pick something off the water, those birds are simply biding their time while waiting for something to happen. 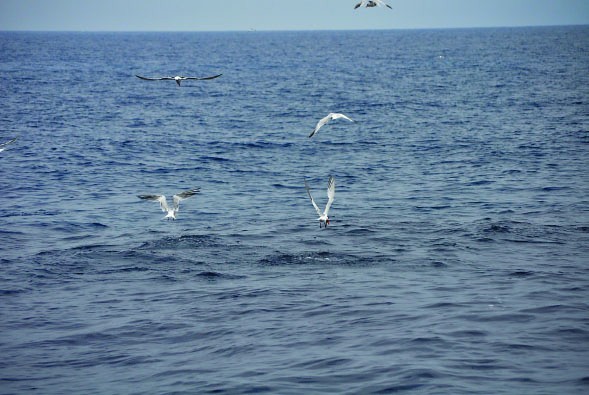 One thing I’ve noticed is the higher the tern is flying, the deeper whatever it’s tracking is in the water column. So, if those lazily high flyers suddenly get low and start flying urgently, it’s time to get that jig in the air. The yellows are about to pop.

Once you’ve located fish, these birds will also help you to keep track of their direction of movement. When yellows are feeding on the surface, they’ll usually attract seagulls, pelicans and cormorants, as well as terns. But when those fish start moving, it’s going to be the terns that are on the front edge of the assault. So, you’ll want to remain off to the side of those birds while running well ahead of them and then shut down and wait for them to come within casting range before firing a jig.

One of the biggest mistakes we make as anglers is to attribute our success to our own awesomeness rather trying to figure out exactly why we caught fish. To improve as anglers, we need to look past that and spend a few minutes breaking down our trip and looking at what worked and what didn’t. This isn’t as much fun as patting yourself on the back, but done properly, this post mortem will lead to theories as to why things turned out the way they did. Your job on the next trip is to put those theories to the test and see if you’ve actually figured something out or if you just got lucky. 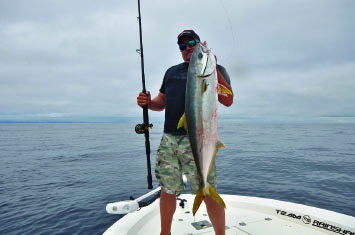 They say that good fishing never made anyone a good fisherman. But this year’s opportunities for success on the water are as good as they’ll probably ever be in Southern California. So, why not get out there, catch some yellowtail and focus on building confidence in your ability to go out and find your own fish? You’ll be way ahead of the game when the fishing goes back to normal.

Bluefin Continue to bite for those will to make the trip. Sportboats continue to … END_OF_DOCUMENT_TOKEN_TO_BE_REPLACED

This past week saw some wind and tough weather. As we pass the full moon the … END_OF_DOCUMENT_TOKEN_TO_BE_REPLACED

Over the weekend, my boat partner, Matt Kotch and I were returning to Newport … END_OF_DOCUMENT_TOKEN_TO_BE_REPLACED

The Tuna continue to be the stars of the show. With new techniques like high … END_OF_DOCUMENT_TOKEN_TO_BE_REPLACED