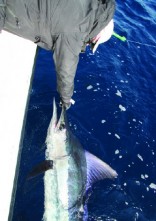 I love marlin fishing. There is something about sitting in a fighting chair with a fresh cup of hot coffee in the early morning hours over a calm, glassy sea. The sun’s rays cast a warm glow to all points of the compass and you’ve got four lines properly set and ready for instant action. It’s the best.

We rarely use marlin jigs. We use ballyhoo with circle hooks. Why? Because in my humble opinion, ballyhoo gets bit more often than do jigs. Indeed, I recall fishing one fall day off Dana Point and we got five strikes on ballyhoo within 60 minutes. How many of those fish did we catch? Only one. And herein lies the subject of this column. Yes, ballyhoo will attract strikes, but it’s all about what happens in the first three to 10 seconds that will determine if the fish stays on. After many trial by error attempts, here’s what my learning curve has taught me. The following assumes you are trolling about 5 knots, are using circle hooks and have the rod in the holder, line in a release clip with just the clicker on and the drag all the way off.

On the strike and hook-set: I like to pick the rod up out of the holder, take the clicker off (I think the fish can sense the vibration of the clicker) and count to 10 before putting the lever in the full strike position. I try to take two or three seconds to move the lever so as not to move it too fast and pull the hook. Why a 10 count? Why not a five count? Because the fish, of course, will first squeeze the bait thinking it is killing it (of course the ballyhoo comes frozen and thawed for deployment).

It will then usually make a turn and when it does, it generally picks up speed after it swallows the bait. I’m still in free spool. So I find waiting to 10 makes sure the hook has time to enter into the marlin’s mouth and that marlin is not still holding the bait sideways with the hook not yet in its mouth. I have lost too many fish applying the drag too soon. Even at a 10 count, the circle hook ends up where it is supposed to be, in the corner of the mouth, but, of course, not always. The longer you wait, the more you risk gut hooking the fish, which, of course, decreases its chance of surviving after release.

Other anglers have different variations to this. I asked a few to share how they like to fish ballyhoo.

Bill DePriest (One Hot Tuna) on the strike and set: If the angler is someone without much ballyhoo experience, I tell them to set the hook with the rod in the holder. If the angler has experience, I tell them to take it out of the rod holder. The best way is to put the reel in gear once you feel the fish turn and really take off … meaning it has swallowed the bait. I would say between 3-5 seconds after the rigger pops. I then slowly put the real in gear when using a circle hook.

Chase Offield (Kelsey Lee) on the strike and set: I always take the rod out of the holder, let the fish eat for about four or five seconds then drop the rod tip down and move the lever drag to just below the stroke. Once the fish has settled, I go to strike or just on the button.

Steve Behrens (Joker) on the strike and set: Treat it like a live bait. I point the rod tip at the fish and advance the drag slowly. When using a J hook, the rod position is not as critical but the hook-set is sooner, like three seconds. For a circle hook, maybe five count.

With all the time and money you spend in pursuit of your game fish, doesn’t it make sense to have the very best kill bag onboard? Bleeding your fish immediately and keeping them on ice properly chilled can make all the difference in how the meat will taste. I use a Reliable kill bag for several reasons. First, it is very well insulated and keeps the ice from melting, especially important on overnight trips. Second, the zipper is thick and seems to last and work longer than other bags. And third, to paraphrase Donald Trump, “The bag is very, very, very strong. It is probably the strongest bag in the world.” And it is. We’ve had two guys on each end lift well over 180 pounds of fish inside the bag without the handles breaking. Buy Reliable and you’ll put the very best quality meat on the table.

Bluefin Continue to bite for those will to make the trip. Sportboats continue to … END_OF_DOCUMENT_TOKEN_TO_BE_REPLACED

This past week saw some wind and tough weather. As we pass the full moon the … END_OF_DOCUMENT_TOKEN_TO_BE_REPLACED

Over the weekend, my boat partner, Matt Kotch and I were returning to Newport … END_OF_DOCUMENT_TOKEN_TO_BE_REPLACED

The Tuna continue to be the stars of the show. With new techniques like high … END_OF_DOCUMENT_TOKEN_TO_BE_REPLACED