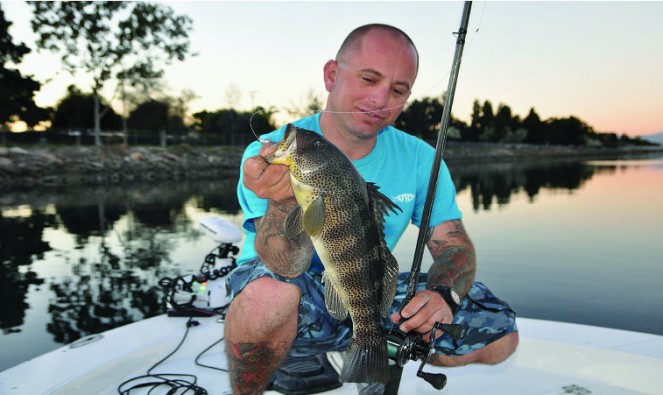 When it comes to preconceived notions, my biggest fault lies in overlooking potential fishing areas based on the assumption that I know what is (or isn’t) there to be caught. This shortcoming was brought to my attention on the first day of last year’s Salt Water Bass Anglers (SWBA) season finale. The tournament format required us to fish the inside of Long Beach Harbor in search of a five-fish bag of any species of bass. 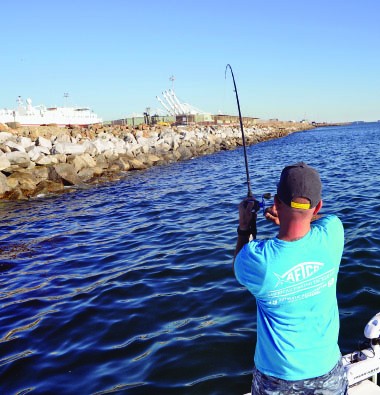 After giving the inside of the breakwall a shot for no bites, I tried dropping on some deep water structure I’d previously found. After coming up empty there as well, I was driving through the harbor and saw several other teams fishing riprap, the rocks that line the inside of the harbor to protect against water erosion.

My tournament partner Matt Kotch suggested we try fishing one of the rocky shorelines, but I was reluctant to do so because I carried the preconceived notion that these were small fish spots and not worth fishing during a tournament. But, not really having any other options, I agreed to give it a try. 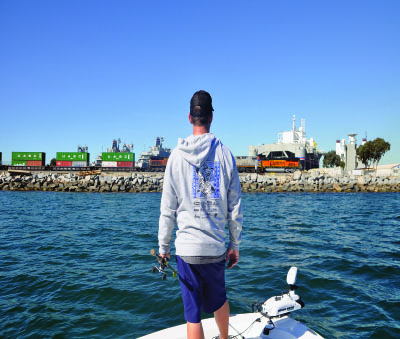 Things started off just as I expected, with tiny calicos biting the small swimbaits we were throwing. But as we progressed along the wall and got our baits and presentations dialed in, the fish started getting bigger. Once we had five fish in the tank, we further refined our presentations and began to cull out our smaller fish.

At one point we hit a spot of fish that were so big that we weren’t able to keep them out of the rocks with the tackle we were using. Despite breaking off our biggest bites, we were able to manage an almost 15-pound bag of bass for the day. Even more surprising, our bag ended up only being the sixth biggest of the day. All of them, including the 22-pound leading weight, came from spots that I’d been driving by my entire life because I assumed they didn’t hold big fish. 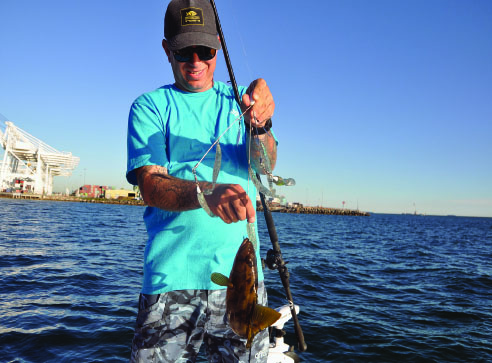 With my eyes opened to the potential that those miles and miles of riprap hold, Long Beach’s inner harbor has become my go-to zone for after work fishing trips. It’s a simple and fun fishery that’s close to the ramp and offers plenty of spots to fish while being sheltered from the afternoon wind. As I frequently do on Friday afternoons, I invited a couple of buddies out for a few hours of fishing and asked them to share some of their tips on catching bass in Long Beach Harbor. 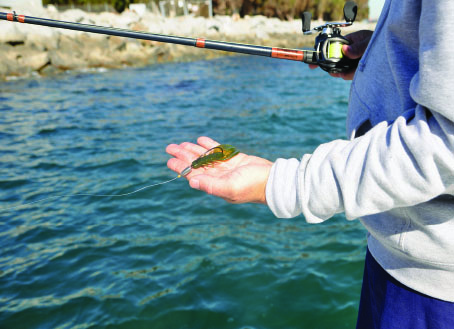 Joining me on the trip was Eric Bent, tournament director of the SWBA and an avowed embracer of “old school” fishing techniques. As a counterpoint to Bent’s conventional style, I invited Abu Garcia pro staffer Chris Lilis, who is always on the forefront of tackle and bait technology. As for me, I just brought my camera and left my preconceived notions at the dock.

When it comes to fishing riprap in the harbor, your boat and tackle can be as simple or as involved as you want. Regarding a boat, basically anything that floats and has a reliable motor will work. Bent normally fishes a 15-foot Whaler and though Lilis stepped up to a nice Crestliner, he used to fish in a 12-foot aluminum boat. Having a trolling motor helps, especially when you’re fishing in a bigger boat, like my Robalo 226 Cayman, but you can get by without one if it’s not too windy.

Tackle varies by presentation, but you can get by with just about any salt or freshwater bass rod. Bent’s arsenal consisted of a very light action Seeker Inshore rod with a spinnerbait tied on it and an extremely heavy graphite rod with a creature bait. This rod was dubbed the “Texas Rake” and used exclusively for pitching baits into the rocks and occasionally pulling on giant sculpin, but more on that later. 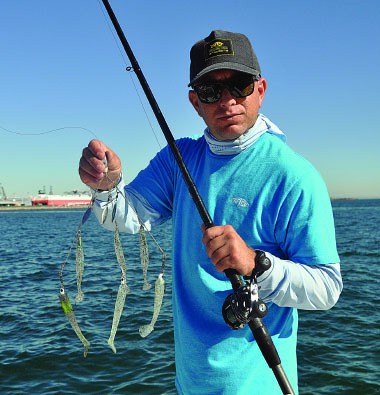 Lilis brought several custom rods, each designed to best fish a particular bait. These included an Alabama Rig rod, a crank bait rod, a jerk shad rod and a spinnerbait rod. Each was matched with the new Abu Garcia Revo Beast, which is basically the beefed-up version of the Revo Inshore.

Breaking down the waters

While all of the riprap in the harbor looks similar, there are actually several different types and they all fish differently. As we cruised past the oil islands in the east end of the harbor, Lilis explained the differences. “The two basic types are what you’d call outer or inner harbor riprap. The outer harbor stuff is anything that’s inside of the breakwall but still exposed to the open harbor. The inner harbor rock is any riprap that’s protected from the open harbor by other riprap or land.” 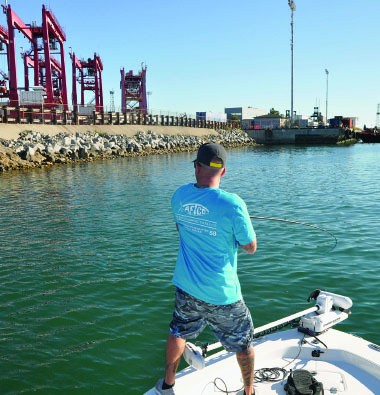 Lilis continued, “In the outer harbor, you’re basically looking for riprap that’s getting surge or has wind blowing against it. This stuff fishes very similar to how the break wall does. Bass are going to be around the areas with surge, looking for baitfish that are getting pushed against the rocks or crabs that are being knocked free.

“When you’re fishing the inner harbor, or any sheltered outer harbor riprap, you will need to fish more thoroughly and cover different parts of the water column. The fish can be anywhere along the length of the rock. They can also be shallow, or deep, so you’re going to need to run some different baits at different depths to figure out where the fish are biting.”

Our plan for the trip was to try and catch all three species of bass, so we agreed to start in the outer harbor to try for a calico and sand bass, then move to the inner harbor in search of a spotty. We started out fishing an area of riprap on the harbor side of the old naval base. The wall is comprised of boulders with the occasional concrete slab and it sits in approximately 20 feet of water. 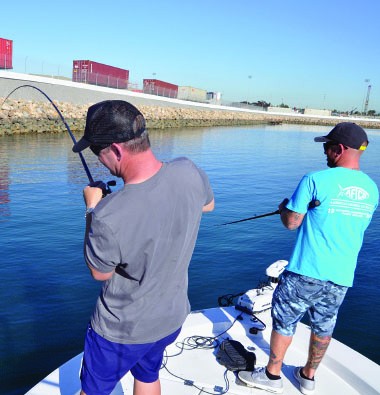 In the shadow of an abandoned watch tower, Lilis and Bent took to the bow and began fishing. While Lilis made long casts parallel to the wall with a Picasso Alabama Rig that he termed “the chandelier,” Bent made short pitches with a Texas rigged green crawdad bait. The new school quickly won out over the old as Lilis connected with several sand bass within the first few minutes.

After working through the first section of wall we moved a short distance to fish a section that lay perpendicular to the one we’d fished before. Bent switched to the spinnerbait at this spot and immediately connected with a sand bass. “The last area we fished didn’t have much surge, so I thought the creature bait would be a good choice,” Bent explained. “I just cast it up shallow, let it sink to the bottom and then hop it down the wall by lifting my rod tip and giving it slack during the sink. They didn’t bite it today, but it’s still my favorite presentation in that situation.” 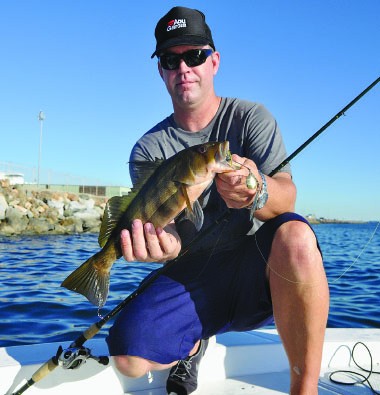 After catching another sand bass on the spinnerbait, Bent went back to his previous technique; this time with a purple Texas rigged tube. “There are some big spotted bay bass in the outer harbor and I’m hoping I can get one to bite this slower presentation,” Bent said moments before swinging on a heavy fish. The fish pulled hard, but ended up being a jumbo sculpin, instead of a spotty. Bent managed several more plus-sized sculpin over the next few minutes before eventually getting broken off by something that fought like the spotty he’d been looking for.

Lilis, in the meantime, was hammering smaller sand bass and calicos on the spinnerbait and while my attention was focused on him in the bow, I heard, “Oh! There’s a good one!” from Bent in the back of the boat. As he swung a nice calico aboard I noticed that Bent had put down the “Texas Rake” and picked up Lilis’ Alabama Rig. “Hey, I just wanted to make a couple casts to check out the new Abu reel,” he said with a sheepish grin before going right back to fishing the Alabama Rig.

Once we’d worked through that section of riprap, we decided to hit the inner harbor in search of a spotty. We spent the next few hours working different stretches of riprap for not a whole lot of action, save a couple more jumbo sculpin on Bent’s purple tube. As we fished, Lilis switched to a crankbait to try and elicit a reaction strike.

“Sometimes a crankbait banging around in the rocks will get bit even if the spotties aren’t actively feeding,” Lilis explained as he cast a Lucky Craft crank parallel to the rocks. “You want a deep diving bait that’s rated for 12 to 16 feet even though the rocks aren’t that deep. This allows you to get the bait down into the rocks and let it bang around. If you get hung up, just stop winding for a second and let the bait float up. A lot of times, the spotties will bite it during that pause.”

Not even the crank bait was producing as the afternoon’s slack high tide seemed to have put the fish into a funk. But Lilis and Bent kept casting in the hopes of finding a sundown bite. As the sun rode lower on the horizon, Lilis switched to a Gulp! Jerk Shad fished on an owner Sled Head. “Fishing the jerk shad isn’t as fun as the other baits,” observed Lilis. “You just kind of drag it along and hop it over the rocks. But sometimes the fish will bite it when they won’t bite anything else.” 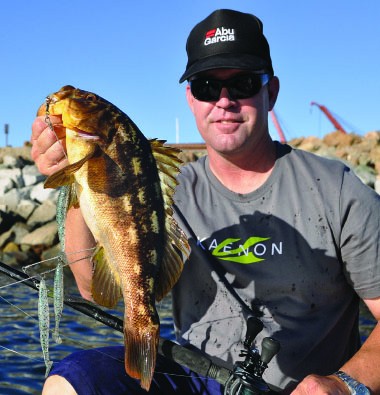 Almost on cue I watched as Lilis’ rod tip jumped and he swung hard on a healthy spotted bay bass. Deciding that this was about as high of a point as we were going to find to end our trip, we cruised back to the ramp with several dozen mixed bass under our belts and smiles on our faces after spending a fun afternoon away from preconceived notions.

Bluefin Continue to bite for those will to make the trip. Sportboats continue to … END_OF_DOCUMENT_TOKEN_TO_BE_REPLACED

This past week saw some wind and tough weather. As we pass the full moon the … END_OF_DOCUMENT_TOKEN_TO_BE_REPLACED

Over the weekend, my boat partner, Matt Kotch and I were returning to Newport … END_OF_DOCUMENT_TOKEN_TO_BE_REPLACED

The Tuna continue to be the stars of the show. With new techniques like high … END_OF_DOCUMENT_TOKEN_TO_BE_REPLACED