Here we are in December and the bluefin are still biting for the guys who want to make the trek out to the 60 mile bank, and anchor up on the high spot. The morning bite has been producing the best results, but pay attention to the slack tides too! These fish are anywhere between 10-40lbs, with the occasional giants coming through. The hot bite has been on 15-30lb fluoro with 2/0 circle hook using live squid or fin bait. The flat fall jig has also been doing well in the early morning. 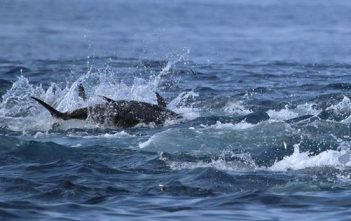 Lots of reports have been coming in from guys scoring giant bluefin being caught behind Catalina.. even some over 300lbs.. this is world class sportfishing in our own backyard at its best! The go to bait has been skipping yummy flyers from a kite around 7 knots, or using a 280 gm Flat Fall jig.. BUT now guys are seeing a lot of success using a rigged “frozen flyer” attached to a helium filled balloon and drifting. Good luck out there, and keep sending us those reports! 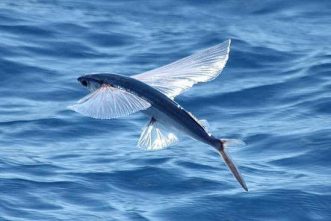 They got on them pretty good today with the three biggest going 190lbs, 204lbs, 207 lbs. They were roughly 180 miles below San Diego!

Reports have been coming in that the big bluefin bite has moved behind Clemente since last week.. guys are still catching them using the flat fall jig and on the kite skipping the yummee flyer. 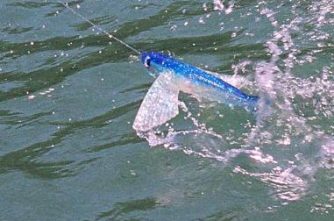 The PCS team went out Monday morning to take a look at the 43. We arrived an hour before the slack tide, and as soon as we reached the area we saw life everywhere, birds crashing, tuna foaming and marks on the meter.. we knew we were in the zone. We put out the kite and stared dragging the yummy flyer. The water temp was cooler in this area, we found a temp break around 68, and above it went up to 73. The water was off color/green, but had lots of bait. We got our first jig strike in 45 minutes, that came off. Our second jig strike was 30 minutes later and it was game on! We had our first bluefin to the boat 2 hours later. Plenty of tuna in the area.. good luck! 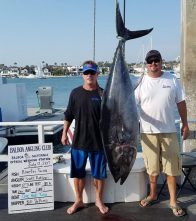 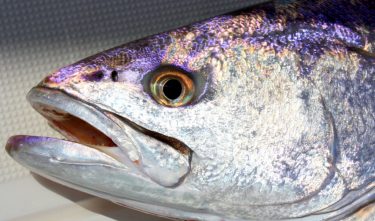 Starting June 16, 2017 the recreational white seabass daily limit increases to three per person. The minimum CA size limit for seabass is 28 inches. The average seabass at that length is about 5 years of age. Seabass typically forage on squid, sardine, anchovy, red crab, and mackerel. The best time to target them is during their spawning period between March and June. During this period they expend a lot of energy producing eggs and seeking out spawning locations. All of this effort produces a relentless appetite driving them to become voracious feeders. Predicting when seabass will turn on to feed can be difficult. Ideal conditions to target them are often before and after a full or new moon phase with big swinging tides, accompanied with strong currents, are often a good indicator to get them started in a feeding frenzy. 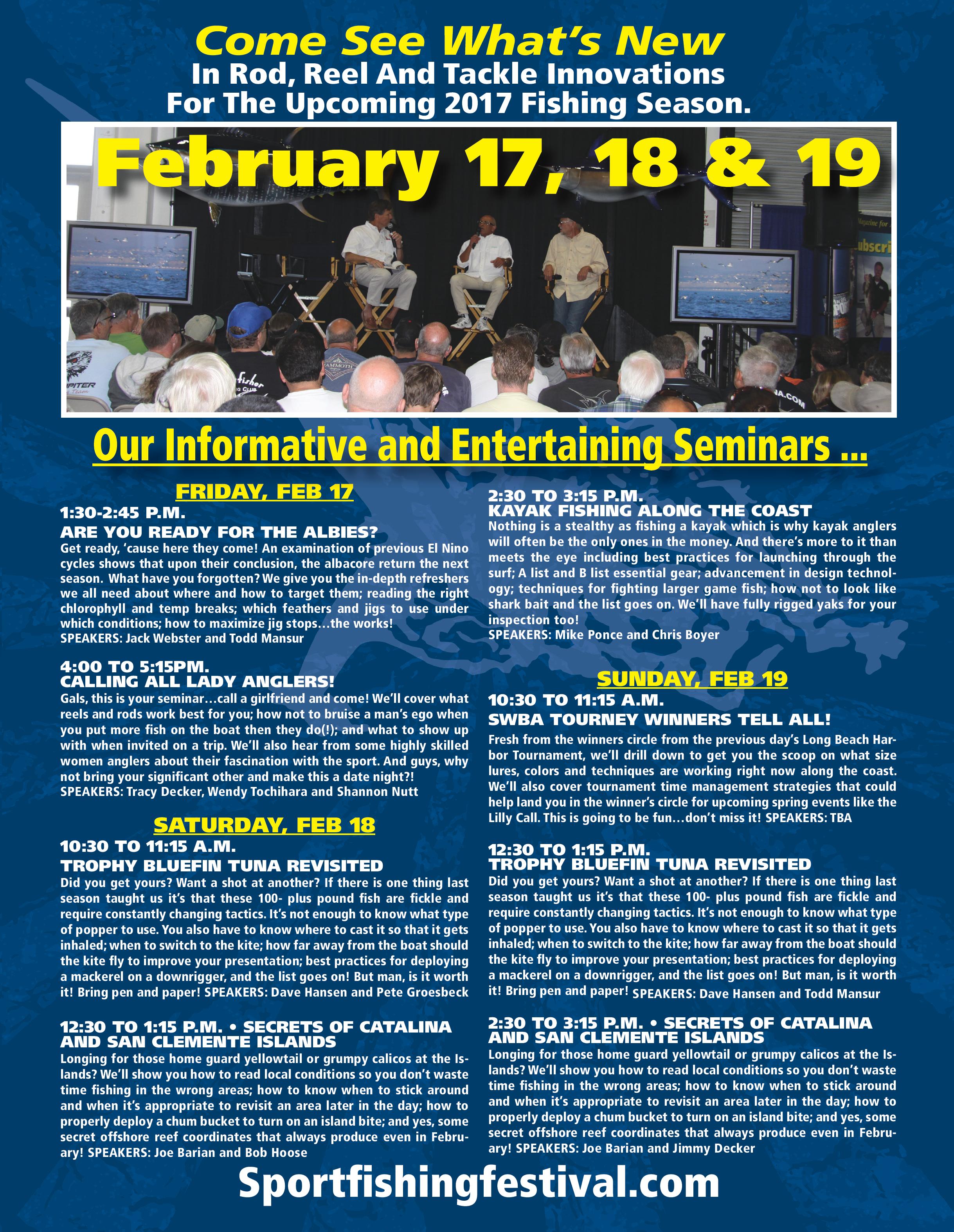 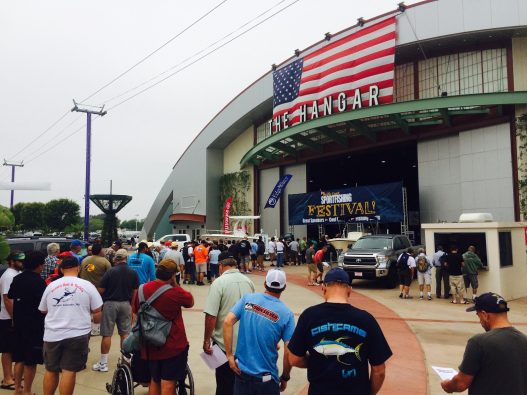 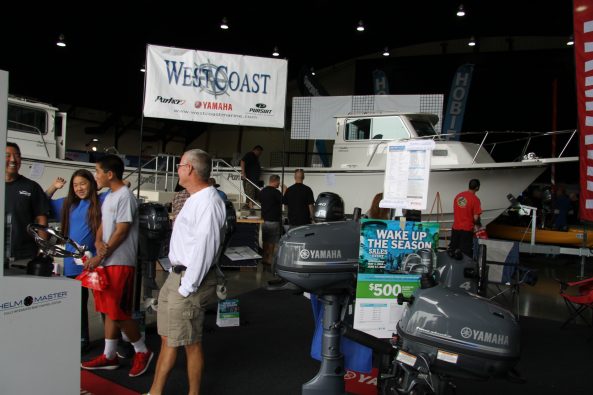 According to a San Diego Tribune article written by Deborah Sullivan Brennan,  Pacific bluefin tuna could be off limits for U.S. fishermen if federal scientists agree to protect the fish under the endangered Species Act. The Center for Biological  Diversity made the request for protection, with more than a dozen groups including the Greenpeace, Earthjustice and the Sierra Club involved. The process of review and public comment on the endangered listing would take two years, if the service agrees to consider.

The Sportfishing Conservancy plans to ask the California Fish and Game Commission for a regulation change that could make it easier – and more affordable – for Southern California private boat anglers to “tank up” with local live bait.  Program Director April Wakeman will present this proposal at the upcoming Commission meeting in Bakersfield, asking that the Commission allow the recreational use of cast nets in Southern California ocean waters for gathering live bait.  Currently, they are only allowed North of Point Conception.

Cast nets (also known as Hawaiian Type Throw Nets) are commonly used by anglers in many other ocean live-bait fisheries.   For example, guided and private-boat trips in Florida and Gulf Coast waters (where there are no “bait receivers”) typically begin with cast netting a tank of pilchards, goggle eye and other live baits effective for inshore or offshore gamefish.   The same techniques and equipment could be used to catch popular live baits found in Southern California waters, and in many instances it would likely be faster and more effective than “jigging” individual baits using hook-and-line or waiting in long lines at bait receivers.

“We are seeking a minor regulatory change that should put Southern California anglers on level footing with those in the north,” said Ms. Wakeman.    “The change should have little or no impact on baitfish populations,” she added.

Bluefin Continue to bite for those will to make the trip. Sportboats continue to … END_OF_DOCUMENT_TOKEN_TO_BE_REPLACED

This past week saw some wind and tough weather. As we pass the full moon the … END_OF_DOCUMENT_TOKEN_TO_BE_REPLACED

Over the weekend, my boat partner, Matt Kotch and I were returning to Newport … END_OF_DOCUMENT_TOKEN_TO_BE_REPLACED

The Tuna continue to be the stars of the show. With new techniques like high … END_OF_DOCUMENT_TOKEN_TO_BE_REPLACED