The Gray Ghost. A lot can be said about a fish by the nicknames we choose to give it. These elusive croakers slide in and out of coastal areas, only subtly making their presence known. One of the only clues we have, especially this time of year, is when the market squid finally starts to float and bed in our warming coastal waters. Whether you made it out to the islands on a mothership, or are beach launching your kayak from the mainland, the white seabass is one of the inshore trophies you don’t want to miss.

The season typically runs from as early as March to as late as August. During these months the fishing is far from steady. There can be constant reports from spear fishermen seeing them cruising through the kelp, but not a one has been taken on rod and reel. Then all of a sudden the coast looks like the 91 Freeway at rush hour. Persistence is going to be key, but on the bright side some of the best sunrises I’ve ever seen have been while fishing for white seabass. Just don’t forget your flashlight. Getting onto the water and making bait before sunrise (or sunset) will allow you to fish during the gray light and increase your chances at landing the big one. 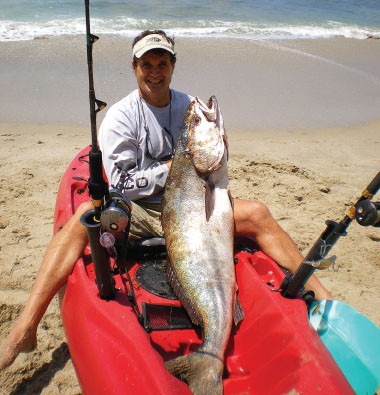 Several years ago I remember sitting in on Captain Mark Wisch’s seminar on catching and using live squid to target white seabass. While the information was priceless and helped me better understand the fishery, the frequency in which I, as a kayaker, could get my hands on a small scoop of live squid was few and far between. On the few occasions that I did manage to get a few live squid for my kayak, chances are the bait quickly fell victim to a calico or a barracuda, and the ghosts were nowhere to be found. Fin baits and hard baits are the tried and true, most-accessible baits for the kayak fisherman.

Greenback mackerel seem to be the go-to fin bait for me when it comes to targeting the larger inshore species. They are extra slimy and extra hearty, and no matter how careful I am when handling them, the sharp spike near their anus always seems to find its way into a finger. Sabiki rigs are a great way to put some bait in the bucket. If the mackerel aren’t really reacting to the sabiki, small chunks of fresh dead squid put on each of the hooks is usually enough to get them motivated. 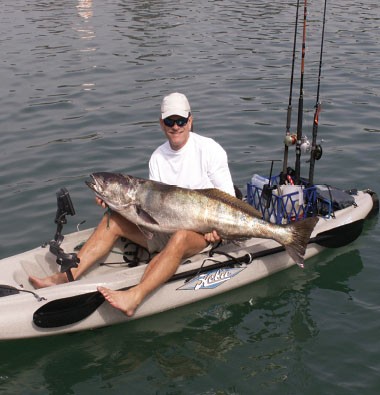 I like to use one of my kelp cutter rigs for this style of fishing. Since we’re mostly fishing on the edge of the kelp, 60-pound braided line tied to a 30-pound fluorocarbon leader will help you saw your way out of the kelp, while also putting the line-shy white seabass at ease. Some guys like using mono here, but their sharp gill plate can really start to grind away at the leader, so the more abrasion resistant the better. Nose hook the mackerel with a 2/0-4/0 sized circle hook. It’s nice to have a second rig here to tie in a sliding sinker. There’s no telling what part of the water column the white seabass will want to bite so be prepared to change if the conditions tell you to.

La Jolla, Dana Point, San Mateo and other southern coastal hotbeds for white seabass will usually see a lot of spear fishing action. These guys can be your eyes under the kelp and are generally more than willing to pass on information. Don’t be afraid to ask if they happen to pop up nearby. Even knowing what part of the water column these tanks are hovering at can make a huge difference.

One key advantage we have as kayakers is our stealth. The only sound we make is from a little bit of swell against the hull and from our paddles or pedals gliding through the water. This also allows us to get into areas of the kelp that power boaters can only dream of. Stay near the edge of the kelp, but keep an eye out for boiling bait. Another thing to look out for is dirty water. Fishing Catalina, the areas of cloudy, milky water are easy to spot, but our onshore waters can be a bit more difficult. White seabass like to ambush their prey, so moving through an area that has lower visibility adds another chip to the pot.

Fly-lining mackerel near the kelp can be incredibly frustrating. The second you toss that fresh greenback out, they bolt straight into the kelp. To help in making them cooperate, I like to cast them out toward open water, let them tire some and then start my troll. Even if the bait is still swimming out toward nine o’clock, as you slowly start your troll down the kelp line they will eventually settle in. Don’t be afraid of soaking these guys for too long. The longer they soak, the more docile they get, and that in turn makes it an easier meal for the opportunistic white seabass. 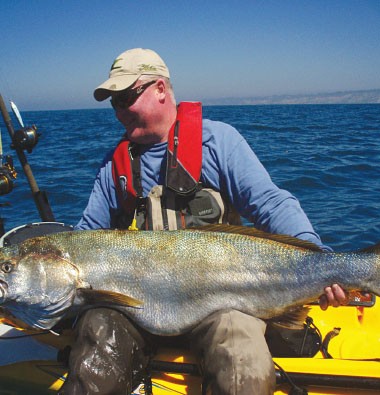 Fresh dead squid is another good option for kayakers. If I decide to dead stick a rod, I will pin two of them onto an iron and set it just off the bottom with a light drag. The natural rocking of the kayak will bring those dead squid back to life as they lift up and fall back down.

Whether it’s the dead stick or the fly-lined mackerel that gets bit, be patient in setting the hook. Let him sample the bait for a bit and once you feel the weight on the line, give it a solid five count and wind down and set the hook. They will try as hard as they can to bully their way into the kelp. Pressure is going to be a balancing act. Their soft mouths require finesse, but trying to tow a 50-pound fish from inside the kelp takes some muscle. Keep the rod tip up, back off the drag a bit and let the spectra do the work. Once they’re free of the kelp, tighten back up the drag and keep it tight until you have the gaff in them. They tend to make a few very strong runs filled with plenty of head shakes, but eventually tire themselves out and often end up floating upside down by the end of the fight, making for an easy landing. 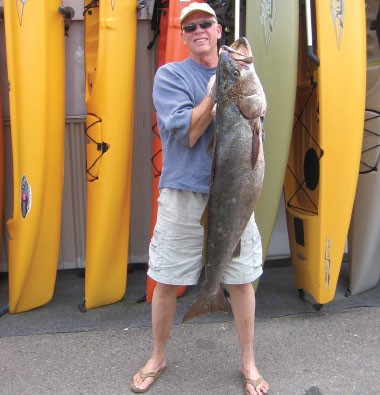 The elusive gray ghosts that we catch off our coast are made possible because of the efforts of the Ocean Resources Enhancement and Hatchery Program (OREHP) and, most notably, the Hubbs-SeaWorld Research Institute (HSWRI). Just this year, they released their 2 millionth white seabass into our waters. Their efforts over the past 50 years have made for a lot of great stories, and full bellies. ■

Bluefin Continue to bite for those will to make the trip. Sportboats continue to … END_OF_DOCUMENT_TOKEN_TO_BE_REPLACED

This past week saw some wind and tough weather. As we pass the full moon the … END_OF_DOCUMENT_TOKEN_TO_BE_REPLACED

Over the weekend, my boat partner, Matt Kotch and I were returning to Newport … END_OF_DOCUMENT_TOKEN_TO_BE_REPLACED

The Tuna continue to be the stars of the show. With new techniques like high … END_OF_DOCUMENT_TOKEN_TO_BE_REPLACED